Since their introduction to the DNA marketplace in 2000, the Black Hole Quenchers have become THE quencher of choice used in qPCR probes and other FRET applications.

We introduced the Black Hole Quencher™ (BHQ™) dyes in 2000 and since then they have become the quencher of choice for qPCR probes and for other fluorescence-quenched probe applications. When fluorogenic dual-labeled probes were first introduced, quenchers were often a second reporter dye, typically TAMRA. The sensitivity of these probes, such as FAM-TAMRA, is limited because the fluorescence from TAMRA can leak into the channel meant to detect FAM fluorescence. Dark quenchers, which are dyes with no native fluorescence, offer a solution to this problem.

The BHQ dyes are true dark quenchers with no native emission due to their polyaromatic-azo backbone. Substituting electron-donating and withdrawing groups on the aromatic rings produces a complete series of quenchers with broad absorption curves that span the visible spectrum. 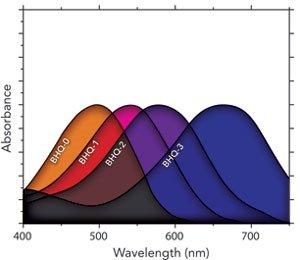 BHQ dyes work through a combination of FRET and static quenching to enable researchers to avoid the residual background signal common to fluorescing quenchers such as TAMRA, or low signal to noise ratio.

BHQ quenchers have broad absorption spectra and can be paired with reporter dyes that emit in the following ranges:

Download our Black Hole Quencher and Dye Selection Chart for more details about other offered dyes.