Like the related, LavaLAMP™ RNA Master Mix, this component kit is built around a proprietary DNA polymerase with strand displacement activity that works on both RNA and DNA templates. With these unique features, it is possible to perform RNA LAMP (loop-mediate isothermal amplification starting with RNA targets/templates) using a single DNA polymerase. This enzyme first copies the RNA into cDNA, and then loop mediated isothermal amplification takes over to amplify the initial RNA target sequence present in the new cDNA making amplified and detectable target-specific, dsDNA.

The LavaLAMP RNA Component Kit is a deconstruction of the LavaLAMP RNA Master Mix, and as such, when reactions are setup using the initial experimental reaction conditions outlined in the Component Kit User Manual, the composition of that reaction matches the composition of the recommended initial Master Mix reaction outline in its User Manual. The individual reagent format of this kit, as opposed to the master mix format, enables complete control of each LAMP assay allowing you to carefully identify the best reaction conditions for your specific target and primer set.

To aid in assay development and future lyophilisation of LavaLAMP RNA-enzyme based reactions, all components in this kit are compatible with lyophilisation. This feature means that reactions will not have to be re-formulated or re-optimised after removal of components that prohibit lyophilisation such as glycerol and betaine. 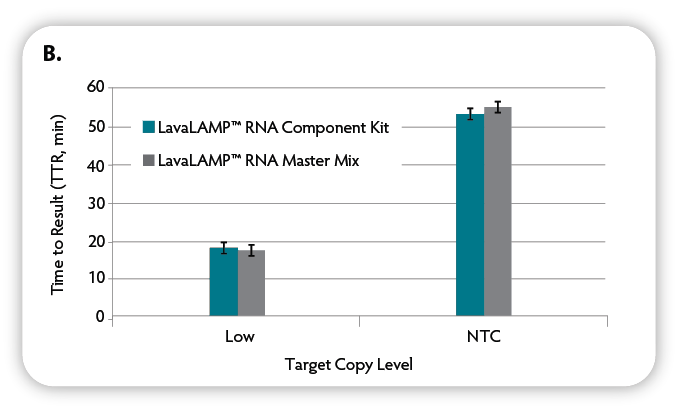 Figure 1. Comparing the performance of the LavaLAMP RNA Component Kit and the LavaLAMP RNA Master Mix. LAMP reactions (6 replicates per test) were set up using the indicated kits and targets (A, MS2 and B, Zika) with the same concentrations of Target-Specific Primer Mixes (1X) and the same target input amounts. The LavaLAMP RNA Component Kit reactions were formulated to 1X LavaLAMP RNA Buffer, 5 mM MgSO4 and 0.8 mM dNTPs (each) to match the final formulations of the LavaLAMP RNA Master Mix reactions. Green Fluorescent Dye was included in all reactions. Reactions were run on a CFX96 Thermal Cycler (Bio-Rad) at 68 °C for both the MS2 and Zika targets and fluorescence was measured during the course of the 60 minute reactions to determine TTR. NTC denotes No Target Control.

Figure 2. Performance comparison of the LavaLAMP RNA Component Kit vs. competitor kits. (A) RNA LAMP reactions were set up using the indicated kits according to manufacturer’s recommendations. Target MS2 RNA at varying input amounts, MS2 target RNA LAMP primers, and Green Fluorescent Dye (LavaLAMP Kit) were included in all reactions. Reactions were run on a CFX96 Thermal Cycler (Bio-Rad) at the following temperatures: LavaLAMP; 68 °C; other polymerases at the recommended 65 °C and fluorescence was measured over 60 minutes to determine the TTR. (B) Delta TTRs were calculated by subtracting the low target level TTR from the NTC TTR for each polymerase tested. Higher positive values indicate better signal to noise, and hence better performance. NTC denotes No Target Control. 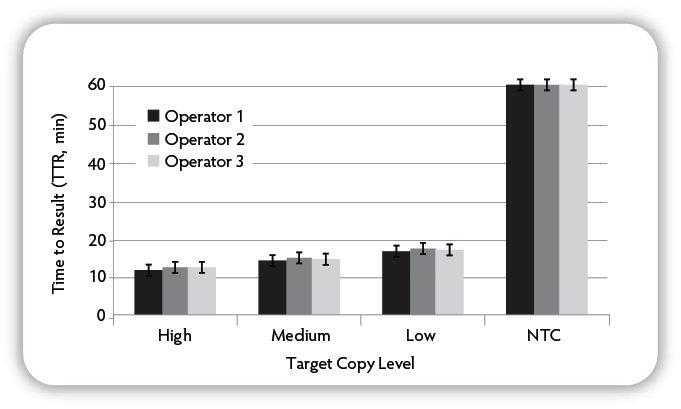 Figure 3. Analysis of operator to operator variability. On the same day, six replicate RNA LAMP reactions were set up per condition per by three different operators using the indicated amounts of MS2 target RNA, MS2 target RNA LAMP primers, and Green Fluorescent Dye. Reactions were run on a CFX96 Thermal Cycler (Bio-Rad) at 68 °C and amplification was monitored in real-time. Results were analysed to determine the TTR and averaged. NTC denotes No Target Control. 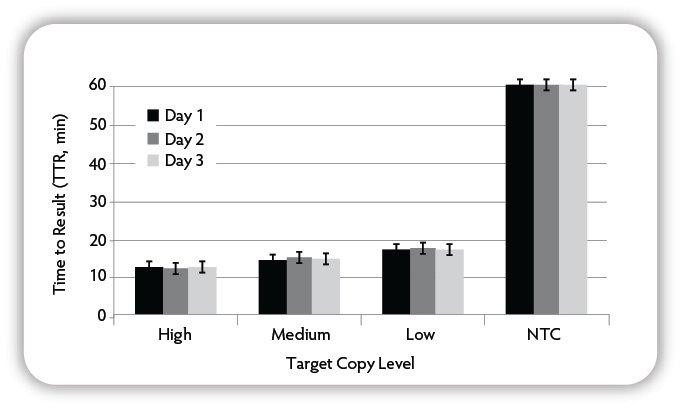 Figure 4. Analysis of day to day assay variability. On three different days, a single operator set up six replicate LAMP reactions per condition tested using the indicated amounts of MS2 target RNA, MS2 target RNA LAMP primers, and Green Fluorescent Dye. On each day the reactions were run on a CFX96 Thermal Cycler (Bio-Rad) at 68 °C, amplification was monitored in real-time. The results were analysed to determine the TTR, and the replicates were averaged and presented. NTC denotes No Target Control.

Licensing information: Lucigen is a fully licensed provider of LAMP reagents for research use. Patents WO 00/28082, WO 01/34790, and WO 01/77317 regarding the LAMP method are owned by the Eiken Chemical Co. Ltd. OmniAmp™ and Bst Polymerase, Exonuclease minus are sold under license for use in LAMP for research use only. The products may not be used for LAMP-based human or diagnostic purposes without obtaining a license from Eiken. US Patent 8093030 for OmniAmp DNA Polymerase is owned by LGC, Biosearch Technologies.