The enzyme in this kit is identical to the enzyme present in the LavaLAMP DNA Master Mix, but the individual reagent format of this kit, as opposed to the master mix format, gives you complete control of each LAMP assay and full optimisation capabilities. Importantly, this kit is an exact deconstruction of the LavaLAMP DNA Master Mix, and when reactions are setup using the initial experimental reaction conditions outlined in the Component Kit User Manual, the composition of that reaction formulation matches the composition of the Master Mix-based reaction.

To aid in assay development and future lyophilisation of LavaLAMP based reactions, all components in this kit are compatible with lyophilisation. This feature means that reactions will not have to be reformulated or re-optimised to remove components that hinder lyophilisation such as glycerol and betaine. 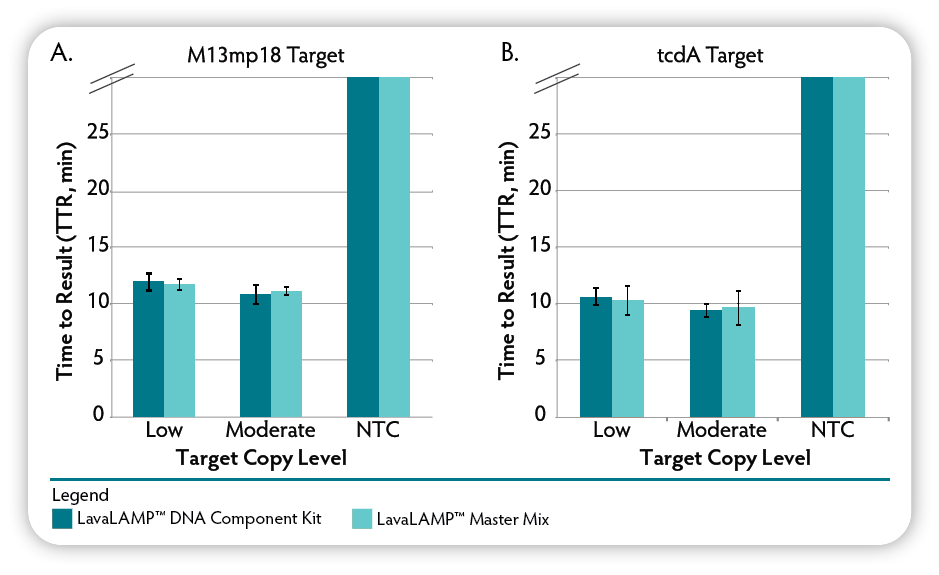 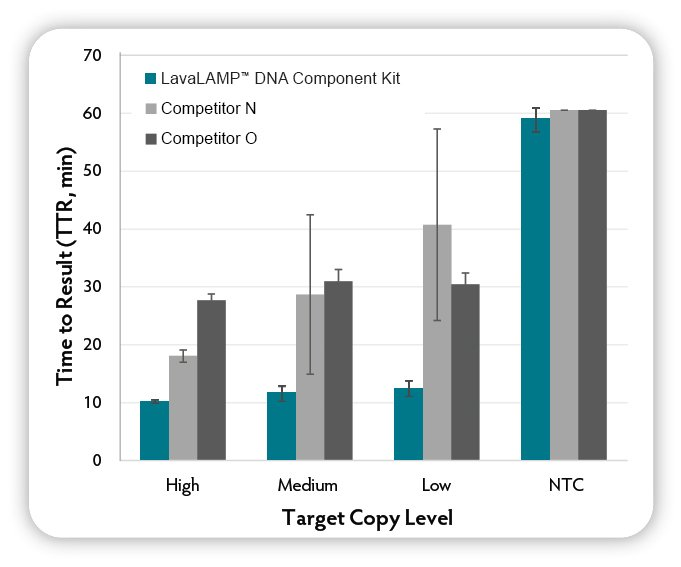 Figure 2. Performance comparison of the LavaLAMP DNA Component Kit vs. Competitor Kits. LAMP reactions were set up using the indicated kits according to manufacturer’s recommendations. Target DNA ( C. difficile) at varying input amounts, tcdA target LAMP primers, and Green Fluorescent Dye (LavaLAMP Kit) were included in all reactions. Reactions were run on a CFX96 Thermal Cycler (Bio-Rad) at the following temperatures: LavaLAMP; 69 °C; other kits at the recommended 65 °C and fluorescence was measured over 60 minutes to determine the TTR. NTC = No Target Control. 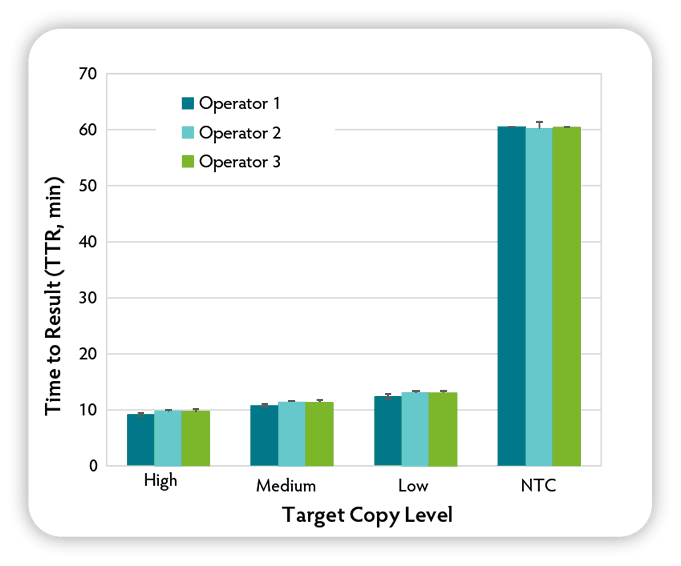 Figure 3. Analysis of operator to operator consistency. On the same day, six replicate LAMP reactions were set up per condition per by three different operators using the indicated amounts of target DNA M13mp18, M13mp18 target LAMP primers, and Green Fluorescent Dye. Reactions were run on a CFX96 Thermal Cycler (Bio-Rad) at 74 °C and amplification was monitored in real-time. Results were analysed to determine the TTR and averaged. NTC = No Target Control. 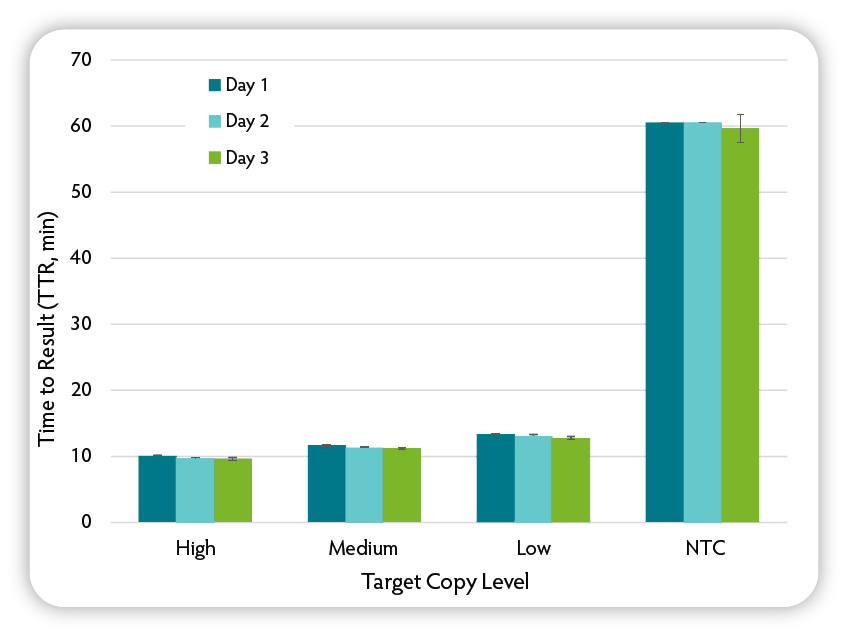 Figure 4. Analysis of day to day assay consistency. On three different days, six replicate LAMP reactions were set up per condition using the indicated amounts of target DNA M13mp18, M13mp18 target LAMP primers, and Green Fluorescent Dye. On each day the reactions were run on a CFX96 Thermal Cycler (Bio-Rad), amplification was monitored in real-time, and then results were analysed to determine the TTR. Replicates were averaged and presented. NTC = No Target Control. 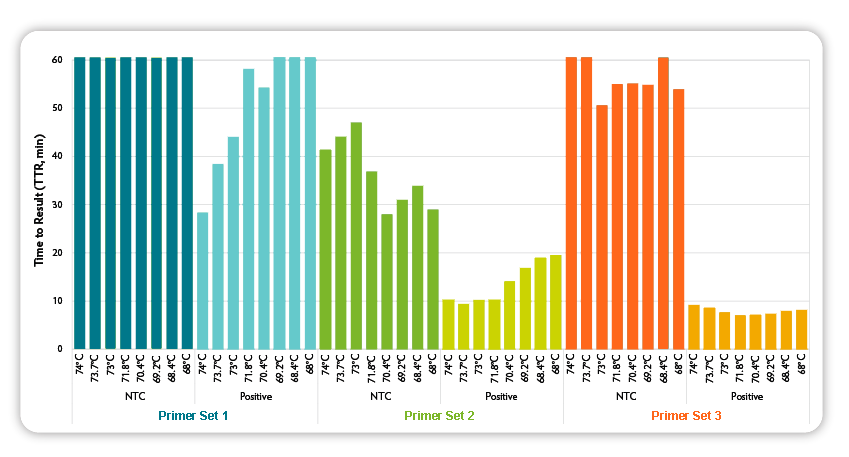 Note: Exact temperatures were set by the CFX96 Thermal Cycler instrument software when the range was selected. Specific temperatures tested will depend on the real-time instrument used.

Licensing information: Lucigen is a fully licensed provider of LAMP reagents for research use. Patents WO 00/28082, WO 01/34790, and WO 01/77317 regarding the LAMP method are owned by the Eiken Chemical Co. Ltd. LavaLAMP, OmniAmp® and Bst Polymerase, Exonuclease minus are sold by LGC, Biosearch Technologies under license for use in LAMP for research use only. The products may not be used for LAMP-based human or diagnostic purposes without obtaining a license from Eiken. US Patent 8093030 for LavaLAMP and OmniAmp is owned by LGC, Biosearch Technologies.